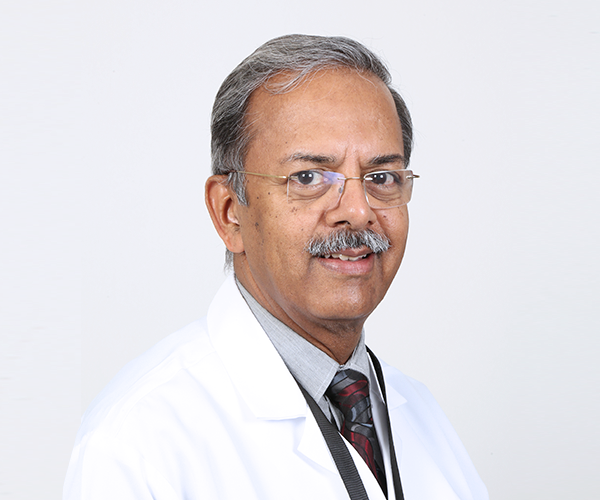 Dr (Col) K. M. Harikrishnan, is the Director of Emergency and Surgical Services at Starcare Hospital. He is an expert in minimally invasive gastrointestinal surgery and a renowned Laparoscopic & General Surgeon. He graduated in medicine from Maulana Azad Medical College, Delhi University. Soon after graduation, he joined the Indian Army Medical Corps, where he served with distinction for over two decades as a medical doctor and as a soldier, winning many awards in both professional and military matters. As a young man, he did a three year tenure on deputation to the Oman Army, and says he fell in love with the country and its people. It is this love which made him come back to Oman in 2010. He obtained his Master of Surgery degree from Armed Forces Medical College (AFMC), a premier medical institution in India in 1986. At AFMC, he was appointed as a Clinical Tutor in the Department of Surgery based on his meritorious performance. Later he went to the apex medical organization, the All India Institute of Medical Sciences, New Delhi, for post doctoral training in advanced gastrointestinal surgery. Dr (Col) Harikrishnan has many accomplishments to his name. He has served in three of the busiest tertiary referral hospitals of the Indian Army as a Consultant in GI Surgery, Laparoscopy and Endoscopy. He was the first surgeon of the Indian army to go for a fully structured laparoscopic surgery training programme, way back in 1992. Based on his professional commitment, he was admitted as a Fellow of the American College of Surgeons in 1996. He honed his skills in advanced laparoscopic procedures during two trips to the UK on an invited Fellowship. Later he moved permanently to the UK to work in the NHS where he worked as a Consultant in General, Laparoscopic & Colorectal surgery till his move to Oman. He also actively pursued Daycare Surgery while in the UK. He has held faculty positions in the Ethicon Institute of Surgical Excellence, New Delhi, and the prestigious Wales Institute of Minimal Access Therapy, where he regularly conducted courses in Basic Surgical Sciences, Laparoscopy, Endoscopy and Care of the Critically Ill Surgical Patients. Dr Harikrishnan has authored over fifty published papers, and made more than two hundred presentations in regional and international forums. He holds active membership of many of the world’s prestigious surgical organizations. He is passionate about teaching and training, and holds a Diploma in Medical Education from Cardiff University, Wales. He is also committed to educating the general public in matters pertaining to healthy living and regularly publishes articles of interest in local newspapers and magazines. As a surgical gastroenterologist he is an accredited practitioner and trainer for all diagnostic and therapeutic endoscopic procedures, like gastroscopy, flexible sigmoidoscopy, colonoscopy and related procedures such as polypectomy and placement of Percutaneous Endoscopic Gastrostomy. He is also a fully trained bariatric surgeon, and performs laparoscopic operations for weight reduction, as well as endoscopic intra gastric balloon placement. His areas of interest include minimally invasive techniques to treat gallbladder disease, oesophageal reflux disease, appendicitis, and hernias; painless treatment of hemorrhoids, such as the ultrasound guided HAL-RAR procedure; complex peri-anal fistulae and pilonidal sinuses. He is also adept at laparoscopic gynecological procedures such as excision of ovarian cysts, myomectomies and fully laparoscopic hysterectomies. At a personal level, he is a qualified paratrooper, and an amateur musicologist. He is an avid reader of fiction and non fiction, and a serious cricket enthusiast. He is currently working on improving communication skills amongst doctors and nurses, and the enforcement of the highest standards of quality and ethical practice.